The Trickery of Artificial Sweeteners 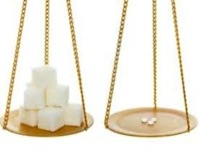 If artificial sweeteners such as aspartame, sucralose, saccharine, cyclamate and acesulfame-K help people to lose weight we could have seen the results long before now. The United States would have given the world a shock with significant weight loss results.  Given their near zero calorie content, everyone expected that their metabolic action would also be zero!

However, these assumptions gave little weight to the sweet taste receptors that overlay the tongue and the palate. In addition we have recently discovered that several of these receptors are also dispersed along the gut. You will find a lot of scientific literature on this subject in my conference “Gut Sweet Taste Receptors” (see my website [email protected] ).

If these above mentioned molecules have a sweetener action it is because their spatial configuration takes up the space of the sweet taste receptor. The sweeteners represent the “prongs” that then match themselves to the “sockets” which informs our brain that something sweet is coming… or something that pretends to be. This information is not harmless: it encourages intestinal absorption of nutrients by a powerful mechanism of genetic stimulation and it increases metabolism. The increase in metabolism is the result of a dual mechanism: increased combustion produced internally and more movements executed by the whole organism.

When it comes to real sugars with their traditional energy content, higher calorie intake is to some extent offset by increased caloric expenditure. But with 'fake' sugars, namely sweeteners without calories, they continue to activate the intestinal absorption of nutrients, but not the increase in energy output that goes with it. We do not yet know the molecular mechanisms that decouple the two phenomena that are otherwise well synchronized, but there is evidence (see the conference already mentioned above)!

I know that this may not be realistic given the widespread belief that "a calorie is a calorie". This is one of the well anchored tenets of the dieticians, when in fact it is a scientific deception. This is precisely why I've encouraged many of my patients to perform the following experiment. Acquire 40 rats, give them free access to a specific food for rodents. Then give a sweet drink to 20 rats while the 20 other will have the same drink but with an artificial sweetener.

The experiment, certainly not very seductive to start with, will become clear one month later when you weigh all your rats! Here's the good news:  you don’t have to buy all those rats! Researchers from the Federale University of Rio Grande do Sul, at Porto Alegre in Brazil, have done it for you and they recently  published their results in October 2012 in a renowned medical review (see details below).

These Brazilian scientists chose to give half the rats sweet yoghurt and the other half yoghurt with an artificial sweetener, but the principle remains identical: to compare the real sugar to its substitute. Guess which rats were the biggest after 12 weeks! There, you are starting to understand…..