The Benefits of the Paleolithic Diet 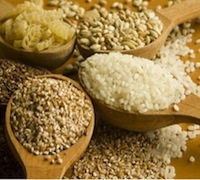 Human societies started to cultivate wheat in the middle of the 8th millennium BC, so about 10,000 years ago, in the ‘Fertile Crescent’ region, then known as Mesopotamia, which now consists mainly of Iraq and Syria.  Maize (corn) cultivation started about 9,000 years ago in the southwest of Mexico; whilst for rice it was some 7,000 years ago in northern India.

Nowadays wheat, corn and rice constitute the three major cereals, whose combined annual consumption exceeds two billion tons worldwide. However, the most common IgG food allergies are wheat for Europe, corn for America, and rice for Asia.  In contrast, the consumption of these cereals by our ancestors in the Paleolithic era was comparatively minor.  It should also be noted that these plants were much more primitive and contained fewer chromosomes than they do today.

The ancestor of wheat is called einkorn, a cereal still present in the Middle-East which contains 14 chromosomes (diploid) against 42 (haploid) of modern wheat. The ancestor of maize (corn) is called teosinte and its cob measured 3cm, compared with one that could reach 45cms today.  One can easily see that not only is there a difference of consumption on a quantitative level but also huge qualitative disparities.

It is generally agreed that the transition between the Paleolithic era and the Neolithic era happened around 9,000 years BC, precisely at the time of the first crops of wheat in the Tigris and the Euphrates valleys. Agriculture and livestock were progressively replacing hunting, fishing and gathering. The nomad hunter-gatherers began to multiply and settle down: the first city in the world was apparently developed very close to these fertile regions, in Jericho in the West Bank about 11,000 years ago.

This transition period is of interest to us for more than one reason, because it also coincides with the emergence of several new illnesses, firstly infectious then degenerative… But let’s go back to our Paleolithic diet: no cereals but of course also no animal milks nor any of their derivatives. One has a hard time picturing these hunter-gatherers trying to catch wild animals to milk them, or even worse the females that are breastfeeding their newborn mammals… However as we have already pointed out, dairy products constitute a major source of allergies and intolerance.

Ask around and you will be surprised by the number of people who feel better when they have temporarily removed cereals and dairy products from their diet. Why not try it yourself and evaluate whether it makes a difference?

If you are thinking Paleolithic, make sure you realize that the hunter-gatherers didn’t always steal the eggs in the nest of the same species of birds. We must respect the rotations of food, especially species, which is essential. When they didn’t find eggs in winter, (obviously, as the birds do not lay during that season) this allowed the hunter gatherers to “reset the meter to zero” by inserting an interval of a few months without eating eggs. Please follow the food seasons, and strive to eat local produce whenever possible.

In order to start this rotation of foods according to the seasons, you will find a section on my website www.gmouton.com, which is called “Seasonal” which lists all the wonderful seasonal produce of the month – vegetables, fruits, nuts, meats, game, fish and seafood. But… you should not forget to limit the consumption of fructose, preferring less sweet fruits by reducing portions of the most sugary fruits (see the Fructose list) and by generally emphasizing mostly vegetables, naturally less rich in fructose (even if their content is not always negligible).